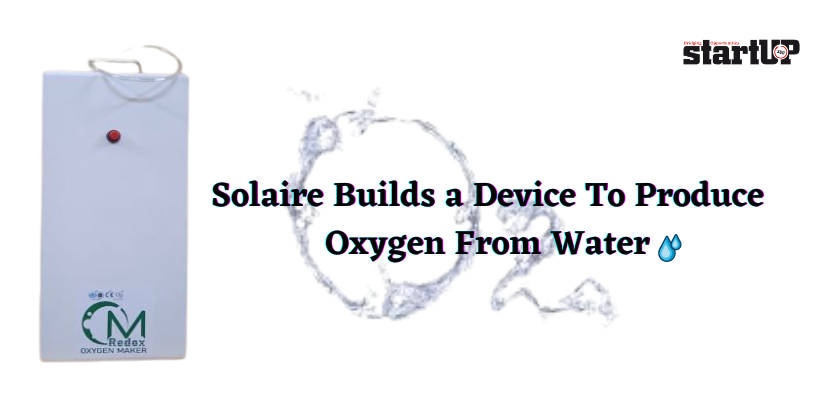 A Bengal-based startup, Solaire builds a device that can extract oxygen from water simply by flipping a switch. They named it the “OM Redox’ device.

Dr. Soumyajit Roy and his wife Dr. Pei Liang, who co-founded the Solaire Initiatives Pvt Ltd, stated on Thursday that “the device is nothing more than a deep science breakthrough that provides oxygen that is 3.5 times purer than that one gets from a concentrator“.

The Department of Biotechnology chose the product for display and introduction on its tenth anniversary and at the first Bio-Tech Expo in 2022.

Roy, an academician at the Kolkata-based Indian Institute of Science Education and Research said that, “their invention, which creates the life-saving gas from water, is known as pneumatically linked water oxidation by electrocatalytic reaction (Power)”.

Also, the scientific couple is in talks with numerous companies for licensing the gadget and for manufacturing and marketing it. “This technology is patented and approved by the World Health Organization and European Conformity,” he added.

Pei Liang, a bachelor of medical graduate from Huazhong University of Science and Technology in China, described the device as a “sleek white pinewood box, weighing 8 kg, which distributes oxygen only by pressing a switch and works with electricity and also with a battery back-up of 3.5 hours.”

Sunrita Hazra, managing director of West Bengal Electronics Industry Development Corporation Limited (Webel) said, “We are currently debating whether to manufacture and market the oxygen-producing equipment. We have faith in technology and are awed by how user-friendly it is. The device can be used by a female or a boy. The item is anticipated to go on sale within the next three months given the startup’s progress”.