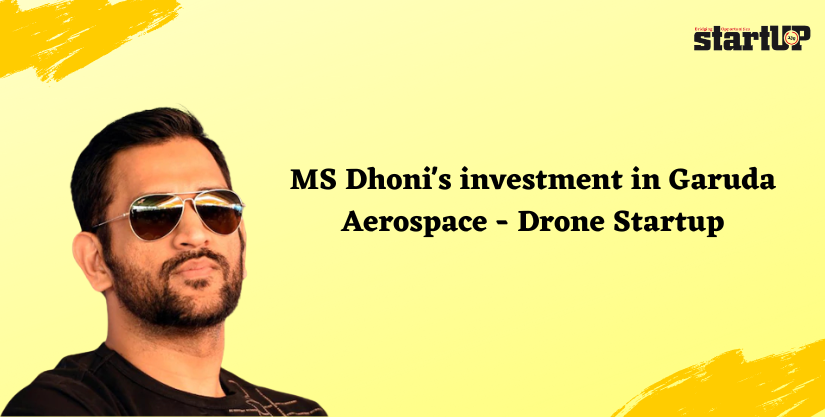 Cricketer Mahendra Singh Dhoni has invested an unknown sum in Garuda Aerospace, a drone startup located in Chennai. He becomes a shareholder & brand ambassador of the company.

Garuda Aerospace is a drone-as-a-service (DaaS) startup founded by Jayaprakash in the year 2015. The company creates, manufactures, and customizes drones for a variety of uses, including delivery, disaster relief, and agricultural applications, among others.

MS Dhoni stated, “I’m excited to be a part of Garuda Aerospace and look forward to seeing their development narrative unfold with the innovative drone solutions they have to offer.”

Meanwhile, Garuda Aerospace founder and CEO Agnishwar Jayaprakash stated, “I’ve always been an avid admirer of Mahi Bhai & to have him as a member of the Garuda Aerospace family is honestly a dream come true.”

Garuda Aerospace, according to its website, is working on long-term projects with a number of government bodies, including the Survey of India, the National Highways Authority of India (NHAI), and the Indian Oil Corporation, among others.

Malaysia, Panama, and the United Arab Emirates are among the countries that have placed orders for 8,000 drones with Garuda Aerospace. Garuda has set a target of producing 100,000 drones in the next two years.

Recently, there have been several fascinating acquisitions and mergers involving Indian drone startups. As one example, Adani Enterprises purchased a 50% investment in the drone company General Aeronautics a little over a week ago.

The government, in the meantime, has lately made significant modifications to drone legislation in order to make it simpler to launch a drone company, with the goal of being a world leader in drones by 2030.

Indian Cricketers And Their Innings With Startups
Garuda Aerospace has joined a growing number of firms using cricketers as brand ambassadors and at their cap tables.

KL Rahul has invested an unknown sum in loungewear business XYXX, as well as becoming an ambassador for the brand. However, KL Rahul isn’t the only current cricketer who has put money into companies.

Virat Kohli is one of India’s most prolific startup investors. Digit Insurance and MPL, two of India’s 100 unicorns, are among the Indian cricket captain’s investments, as well as many businesses such as Rage Coffee, Blue Tribe, Hyperice, Universal Sportsbiz, Chisel, and Sports Convo.

Sachin Tendulkar has also invested in a number of Indian firms, including Unacademy, an ed-tech unicorn, and Spinny, a used automobile marketplace.